The I2C Studio application and the I2C Framework are not limited to access locally connected I2C interfaces. All your telos I2C interfaces can be accessed remotely as long as the PCs have a ethernet link via local area network LAN or even via the Internet. 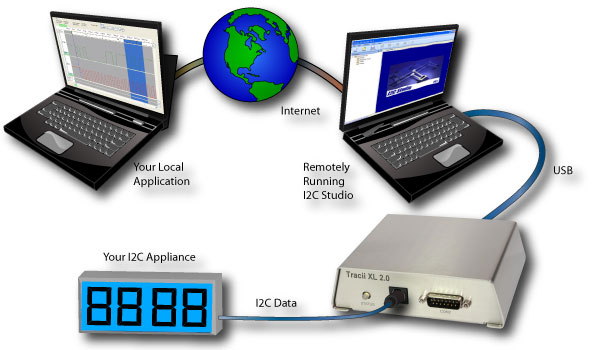 How To Enable It 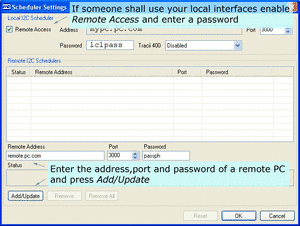 Open I2C Studio, selection Options/Remote I2C Schedules, you will get this dialog.

To use a remote PC

Multiple devices can be connected this way, even on different PCs. So you can control you appliances from all over the world!

Make sure, the selected ports are open in you PC’s/network’s firewalls.

A lot of companies in the hardware development business have got separate offices and laboratories. I2C Studio supports this model by its network support.

Every developer knows the problem: the number of evaluation and prototype boards is always too small. To make things worse these boards are often located on other company locations.

In the age of globalisation more and more production lines get relocated to other countries to keep costs low. In the case of problems during the production process it is very often necessary to fly in engineers to solve the problem on site.

I2C Studio can help you in this situation to keep the costs low. Instead of on-site debugging the engineers can simply use the network feature to analyse the problem from their offices. E.g. they can trace the traffic on the remote I2C bus and get analog shots of the SCL/SDA lines.